Data contained and described in this document correspond to the physically-based surface energy balance model for the glaciers of Taylor Valley developed by the dataset owners. The spatial variability in ablation (ice melt and sublimation), runoff, and climate sensitivity of the glaciers was modeled using 16 years of meteorological and surface mass balance (the net mass gain or loss of ice on the surface of the glacier) observations collected in Taylor Valley (see figure).

An unusual aspect of the model is the inclusion of transmission of solar radiation into the ice and subsequent drainage of some subsurface melt .

Melt model was applied to the ablation zones of the glaciers of Taylor Valley, identified by colored areas. Mass balance stakes, meteorological stations, and stream gages shown for reference. 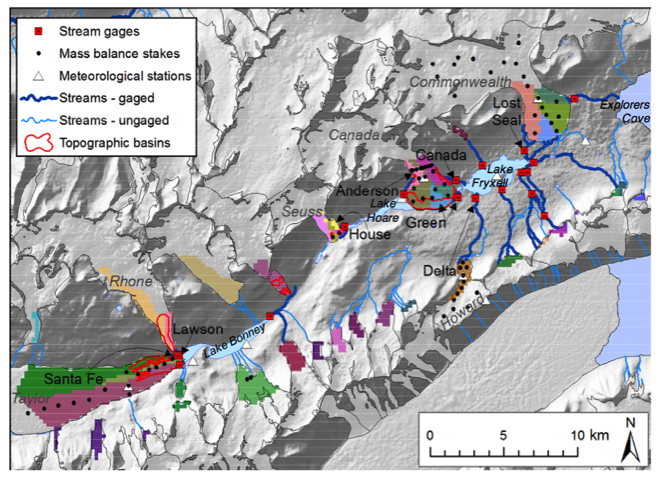 This dataset package is part of a 6-pack multi-set, which you can find at http://mcmlter.org The input files, parameters and examples are found in this package: http://mcmlter.org/content/glacier-melt-modeling-inputs-and-example-m-fi...

The point observations were distributed across the valley on a 250 m resolution horizontal grid using the model MicroMet.  Additionally, MicroMet was used to generate forcing for the ~20 m high vertical cliffs that form the termini of the glaciers.

The distributed meteorological data generated by MicroMet was used to force the IceMelt model which calculates surface and below-surface melt and runoff rates for each location in the model domain.  To adequately model glacier ablation and subsurface ice temperatures required including the transmission of solar radiation into the ice and subsequent drainage of some of the melt generated below the surface.  IceMelt was run using a daily time step for the 1995-2005 time period [4], and then with an hourly time step for the 1996-2011 time period.  The model was calibrated using seasonal surface mass balance measurements, below-surface ice temperatures, and ice density at three locations.  The model was then run in distributed mode across all glacier ablation zones in Taylor Valley.  Model results were compared to surface mass balance stake observations and proglacial streamflow records.

MicroMet is a quasi-physically based meteorological model of intermediate complexity that is suitable for generating gridded atmospheric forcings at high-resolution (~30-1000 m grid increments).  It combines spatial interpolation with known physical relationships between weather and topography for the variables of air temperature, relative humidity, wind speed and direction, incoming solar radiation, incoming longwave radiation, surface pressure, and precipitation. MicroMet includes a preprocessor for filling short gaps in the measurement time series at each station, and makes use of an autoregressive integrated moving average (ARIMA) calculation for filling gaps in diurnally varying variables. MicroMet requires a digital elevation model and the time-series of individual weather variables at various sites in or near the modeling domain. For spatial interpolation from irregularly spaced stations to a gridded dataset, MicroMet uses a Barnes objective analysis scheme.

IceMelt is a physical-based surface energy balance model for glacier ice.  It accounts for both the surface energy balance and subsurface solar heating from absorbed solar radiation, allowing it to reproduce the so-called ‘solid state greenhouse effect’ observed near the surface of Dry Valley glaciers.  The surface energy balance includes terms for net shortwave radiation, net longwave radiation, sensible and latent heat fluxes between the ice and atmosphere, heat conduction into or out of the ice, and melt at the ice surface.  Additionally, the model domain extends 15 m into the ice and the model includes heat conduction through that column, including a source term for solar radiation absorbed internally within the ice based on a two-stream approximation.  The model supports partial melting of ice within a grid cell below the surface, and it calculates drainage of water when partial melt surpasses a specified threshold water fraction.  IceMelt is a point model, but can be run in distributed mode where each location in a spatial grid is run independently.  IceMelt has been run with both daily and hourly time steps.

Inputs to IceMelt are air temperature, relative humidity, wind speed, incoming solar radiation, and incoming longwave radiation at 3 m height and surface albedo at each location to be modeled.

IceMelt outputs all of the terms of the surface energy balance, and sublimation and melt at the surface.  It also outputs ice temperature, melt/freeze rate, and water drainage at all depths modeled within the ice.